The New moon in sidereal Pisces marks the beginning of a new cycle. The day after this new moon marks the beginning of Navratri, nine nights of the divine Goddess. Also called as Vasanta (Spring) Navratri. Navratri is celebrated twice a year. Navratri celebration in Autumn (called Sharad) often occurs after new moon in Virgo – which is directly opposite to one in Pisces we have right now. Vasanta Navratri culminates in Ram Navami, the birth of Lord Rama on the 9th night. Sharad Navrati celebrated in Autumn culminates in Dusshera, death of Ravana or anti-Rama and return of Lord Rama from exile on Diwali. It is important to note the tales of Rama associated with the culmination of both Navaratri celebrations. Lord Rama is the embodiment of Sun or the solar energy. Hence Navratri is a great time to go within and connect with our own inner power. Indians usually observe full or intermittent fasting during Navratri, possibly in an attempt to cleanse and activate the solar plexus or the 3rd chakra which comprises the digestive organs including the liver (cleans the blood of toxins), spleen (kills pathogens by programming the immune system), and pancreas (endocrine organ responsible for maintaining levels of fuel (glucose) in the blood). 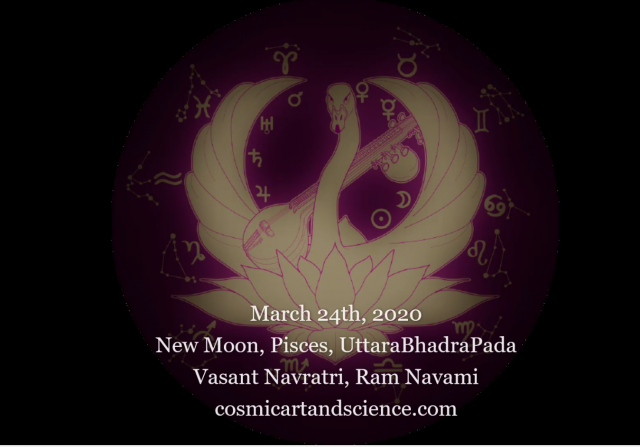 The Goodess is first worshiped as Shailputri (Parvati), the daughter of the mountain king, then as the tapsvini, Bramacharini, who practiced austerity to marry Shiva. She then takes the form of Chandraghanta to coax Shiva to take a socially acceptable form to marry her. She is then worshiped as the fertile and creative form (Khushmanda), as the mother of Lord Kartikeya (Skanda (Kartikeya) mata (mother)), as the fierce transformative force (Katyayani and Kalaratri), as the all empowered, resplendent woman (MahaGauri), and finally as the one who has attained and also the one who bestows the highest wisdom (Siddhidhatri). As the fetus evolves in the womb for nine months, so are the evolving forms of Durga from maiden, mother, to all empowering feminine, worshiped through the nine days.

Light and heat from the Sun takes the form as the all-pervasive Shakti. Shakti takes physical tangible forms like the mountains, rivers, ocean, the body, and others – yet her essence remains formless and intangible.

The chaos, confusion and struggle of the Covid-19 pandemic has brought the world to a standstill. The authorities are deciding between saving lives or livelihood. Much is out of our control. The sign of Pisces reminds us to let go and surrender. This is not equal to apathy. Exalted Mars and Saturn in Capricorn, Venus in Aries and Jupiter in Sagittarius call for action. Mars and Jupiter are also aspecting Venus in Aries – all of which are urging us to reevaluate who we connect with each other, our own selves and the animal life that we domesticate. Of course, this is a time to also reflect on our consumption of animals as food. Are we humanely domesticating animals used for food? Can we do without the consumption of meat? How does consumption of animals affect our solar plexus? There is no one answer and no right or wrong answer. This pandemic has opened the opportunity for us to go within and examine for ourselves.

The governing bodies of the world are also coming to together to tackle the pandemic. During this Navratri, Venus moves into Taurus where it is more grounded in the earthly structures. Jupiter will also move into Capricorn and continue to aspect Venus, bringing in the grace of larger institutions to further help the people. Turning the frustration and rise in energy outwards may lead to major disappointments. Instead turn the energy inwards, direct them towards your higher spiritual practices and then surrender. After you have done it all, let go and surrender while realigning your focus on the little things that bring you daily joy.