This Full Moon in the lunar month of Phalguna, spanning the nakshatras of Uttara Phalguni (UP), Hasta & Chitra in Virgo (this year) is celebrated as Holika Dahan. The month of Phalguna is auspicious as we celebrate Mahashivratri, the night before new moon and then Holi, the day after the full moon

Let’s reflect on the story of King Hiranyakashyapu (HK) to understand the energy of this full moon. HK, in order to avenge Vishnu for his elder brother Hiranyaksha’s death, performed severe penance & received a boon from Brahma that no human, animal, demigod, demon, living or non-living entity could kill him with any weapon on earth or in space; he couldn’t be killed during daytime or night, nor could his blood hit the earth below. This gave HK an invincible God-complex and he ordered everyone in his kingdom to worship him. When HK was in deep penance, his pregnant wife had taken refuge with Narada muni, a transcendental sage who was a Vishnu devotee. The baby in the womb, Prahlada learnt about Vishnu and became a Vishnu devotee himself upon birth. So, Prahlada didn’t follow his father’s orders & continued being devoted to Vishnu. HK made several attempts to kill Prahlada. One such attempt involved Holika, HK’s sister, sitting in a burning pyre with a protective fire cloak on her and unprotected Prahlada on her lap. Prahlada kept chanting Vishnu’s name while the pyre burnt. With Vishnu’s blessings, the fire-protectant-cloak slipped and covered Prahlada, letting Holika burn. That’s the event that took place on this full moon. This full moon usually takes place opposite the Sun either in Purva Bhadrapada (PB) or Uttara Bhadrapada nakshatra both associated with death bed or with pyre. The new moon a fortnight ago in Purva Bhadrapada triggered a glimpse into the divine truth, like a lightning rod that set fire to the corpse of ignorance on a pyre. The mythic tale of Holika Dahan on this full moon harmonizes the energy of PB in its opposite polarity, UP by reminding us to have faith & stay committed to our devotion, just like Prahlada, even if we feel like we are being burnt on a pyre. This kind of devotion requires us to organize & manage the many details of life and then completely let go and surrender. We all get caught up in the managing and controlling part of lives like HK but forget to let go & surrender like Prahlada

Holika Dahan is a very special day in my lineage. My grandmother, Rukmini Patti, whom I never met, tragically died by burning on this very full moon. Rukmini Patti was pure unconditional love. Such id the power of her love that inspite of being born decades after her death, I constantly feel her love through the realms

If one is not consciously participating in a fire ceremony, which is what traditional Indians do on this night, then it is important to be careful of fires. Be in gratitude of the sacred creative and destructive power of fire. Remember, fire in our body is creative as it is contained & intelligent. Rahu-Mars conjunction is adding to the power of collective fire as seen by the recent Fagradalsfjall volcano in Iceland. This conjunction is occurring in a fixed earth sign of Taurus allowing a great opportunity to perform fire ceremonies (havan) to invoke benevolent & occult energies from the heavens to earth. If you cannot perform fire ceremonies then even lighting a contained lamp or candle will help invoke the divine energies. Of course, unintelligent use of fire is destructive like the recent mass shootings

The day after Holika Dahan is celebrated as Holi, the festival of colors. People gather in joy & celebration, playing with colors, water pistons called pichakari and water balloons. It is said that when Shiva and Parvati played Holi, they conjured a drink called bhang, a concoction made with cannabis & milk for recreation. North Indians mostly consume bhang once a year on Holi as a part of their celebration. Holi is one of my favorite festivals as it really celebrates the innocence in all of us – an innocence that is fearlessly anchored & devoted in the higher knowing; unflinched by the ignorance & arrogance of an egoist world

As the story goes, Lord Vishnu incarnated as Narasimha – half man and half lion (neither a human, nor an animal) and killed HK at twilight (neither daytime nor night) by placing HK on his thighs (neither earth nor heavens), ripping his both with his claws (no weapons), and drinking his blood (no drop of blood on earth). The moral of the story: There’s no escaping death. But what dies is only the ego. The innocent love remains and echoes through the fabric of space-time just like my grandmother’s love

Following this full moon, we have Jupiter move into Aquarius on April 5th – making it easier for us to feel the hope & optimism, especially around social issues; Venus move into Aries on April 9th, allowing us to take spirited, inspired actions towards our desires & relationships; and Mars break Kala Sarpa, separating from Rahu and moving into Gemini – bringing some relief to the overheated fiery energy in us – much better for conflict resolution than the close Rahu-Mars conjunction we are currently experiencing. South Indians will celebrate Vishu or New Year so will other sects of Sanatana Dharma on April 14th as the Sun ingresses into Aries and is exalted for the next month. Incidentally on April 14th, the moon is exalted too helping us feel grounded & comfortable in ourselves. We also celebrate Vasant Navratri, the 9 (nau) nights (ratri) of Goddess, culminating with Ram Navami, the birthday of Lord Rama on April 21st. The days following Holika Dahan are much more hopefully, bringing spring in full swing & returning us to the zest of life both literally & metaphorically

Wishing you a very happy Holi filled with love, laughter, joy and celebration

To reach me you can write to: malini@cosmicartandscience.com 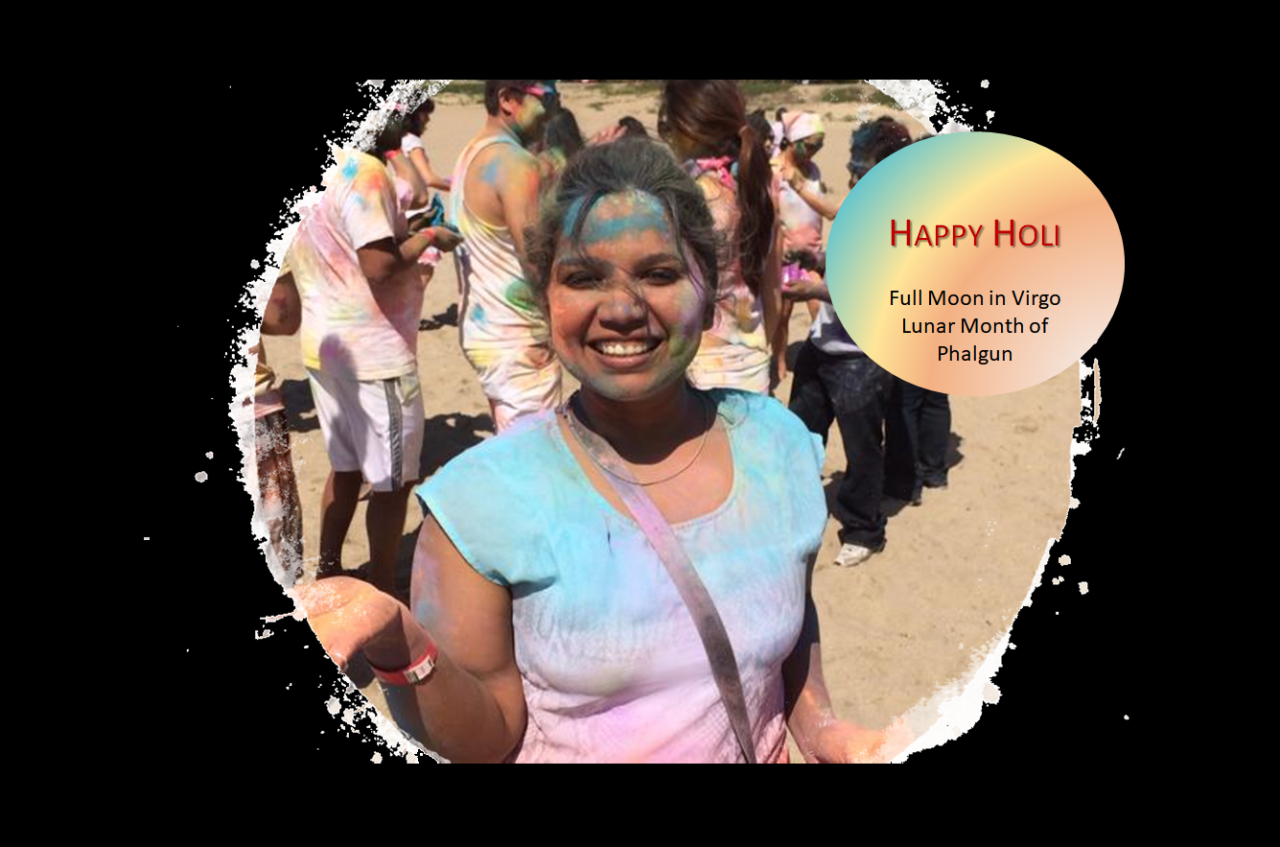 previous
Spiritual and Scientific Significance of MahaShivaratri
next
Day of Love, Khojagiri Poornima