Happy Ram Navami. Today is the 9th tithi or 9th lunar day in the Vedic month of Chaitra. All it means is that after the New Moon on March 23h, the moon has travelled 9 portions in the sky. This Navami is also celebrated as the birth of Lord Rama, the first human incarnation of Vishnu. 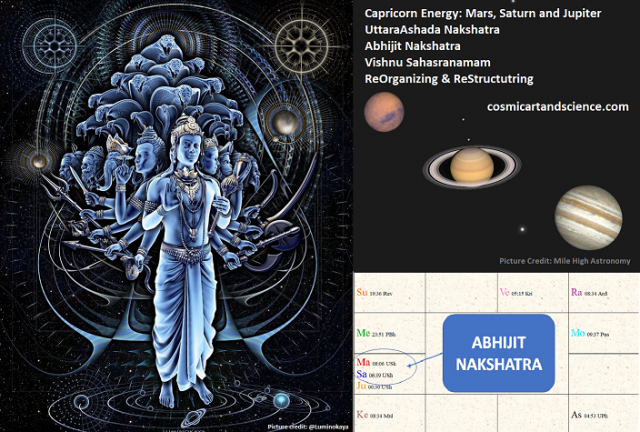 If you have a spiritual practice and also resonate with Indian mythology then notice a subtle shift in focus from Shiva or Rudra-Kali like energies to more Vishnu dominant energies like Rama, Krsna or Buddha. We had the solar eclipse on Dec 26th followed by lunar eclipse on Jan 10th in the Ardra-Mula axis. Ardra is ruled by the fierce form of Shiva called Rudra and Mula is ruled by Kali. The energies we were dealing with up until now had to with uprooting and destroying everything that didn’t work in our personal lives and in our society. We had a pileup of Rahu, Ketu, Sun, Moon, Jupiter and Saturn in this axis during the eclipse season. Well look at the magnitude of pandemic that broke out around that time – all created by a single-stranded RNA virus –with about 30,000 sequenced base pairs. Whereas human genome has 3 billion base pairs.

Since then Saturn has moved into Capricorn and it is the ruler of Capricorn. So has Mars, the energy of Mars being is exalted in Capricorn. Mars when exalted allows us to take concrete actions towards practical solutions rather than expend our energies in anger, frustration and battles that lead no where. Past Sunday, March 29th, Jupiter also joined Saturn and Mars in Capricorn. All 3 planets Mars, Saturn and Jupiter are in the constellation of UttaraAshada ruled by Vishvadevas that were tasked with procreation and maintaining harmony on this planet. The last quarter of UttaraAshada and first 1/5th portion of Shrvana make up Abhijit nakshatra. Abhijit literally means the one who cannot be defeated. This section of sky spanning from 6.40 to 10.53 Capricorn was Krsna’s favoriate. In the Srimad Bhagavatam, Krishna tells Arjuna, that among the Nakshatras he is Abhijit. Right now, we have Mars and Saturn between 6.40 and 10 degrees of Capricorn in Abhijit nakshatra. How auspicious is that!

Since, Jupiter entered Capricorn, I have noticed my attention being drawn to Vishnu. While cleaning one my draws, I found my father’s copy of Vishnu Sahasranamam – the 1000 names of Vishnu or 1000 words in Sanskrit that indirectly define Vishnu – as he is the one who cannot be defined. The book is all torn and tattered and even burnt on the edges. I started studying it and contemplating the meaning of each sound in the stotram. I also have various chants playing in my apartment 24×7, one of them is Vishnu Sahasranamam. This morning I had the experience of dreaming within a dream. I clearly remember 3 layers of dreaming. I woke up from the first layer with the sound of Vishnu Sahasranamam into an image of me sitting on the couch listening to music on my headphones. I woke up from this layer as soon as Vishnu Sahasranamam played on the iPOD and I found myself in the present moment lying wide awake on my bed with the first stanza of the stotram playing in my mind. At that very moment, the music player in my living room switched songs and started playing Vishnu Sahasranamam. I realized that to wake up from my worldly madness, I need to contemplate and meditate more on Vishnu. Vishnu’s incarnations have reorganized and restructured the norms on the planet in that era to reinstate harmony and balance. Isn’t that the Capricorn themes we are all going through – reorganizing and restructuring our internal world to come up practical, concrete measures in order to heal ourselves and the society?

previous
18% Discount on Consults
next
Full Moon in sidereal Virgo