Today we are experiencing the energy of the full moon happening in the nakshatra (constellation) of Mula in the sidereal sign of Sagittarius. We are currently living in times with a high potential for exponential evolution, growth and transformation. Mula is represented by Goddess Kali. The story of Kali reveals several allegories and metaphors.

Sumbha & Nisumbha were two brothers who sought to conquer the three worlds (Kāmaloka/world of desire, Rūpaloka/world of form & Arūpaloka/world of formlessness) through severe penance. Chanda & Munda, two lesser forms of asuras came across Parvati, wife of Shiva (maiden form) and were enchanted by her beauty. They took the news of Parvati’s beauty to Sumbha who was immediately grappled by the desire to conquer Parvati and her beauty. Sumbha and Nisumbha had Brahma’s boon of protection against men and demons but not against goddesses. So, in his quest for Parvati, Sumbha sends the demon Sugriva and then Dhroomalochana followed by Chand and Mund. Parvati intercepts the advances towards her all the while changing and transforming herself.  She emerges as Durga and transforms as ChaMund-eshwari after slaying the duo Chand and Mund. Sumbha then deploys Raktabija (Rakta=Blood; Bija=seed) who had Brahma’s boon of cloning himself when his blood drops hit the earth – which made it impossible to destroy him. To meet the challenge of the fight against Raktabija, from Durga’s eyebrows emerges Kali (the dark one. The form that is left behind is called Gouri, the fair one). As Kali begins slaying the many clones of Raktabija, she drinks his blood to prevent it from falling on the earth, wears the cut clone-hands around her naked body as skirt and wears the cut clone-heads around her naked torso as a garland. Eventually Nisumbha & then Sumbha are slayed too.

Kali becomes drunk on the blood and the immense energy she has moved through. There are various endings to this story. According to Tantric traditions, after slaying the demons, Kali dances in trance and ecstasy; she creates rhythm by the stomping of her feet; her long unbound hair creates movement of the wind as she dances; her dance creates a pulse and a rhythm in Universe. So ecstatic is her dance that Shiva dances the tandav (the scared dance) in tandem with her which culminates in them making love with Shiva in a corpse (Shava = dead body) position & Kali infusing new life into him. It is at this moment when Parvati, who started off as the student of tantra with Shiva becomes his equal & then supersedes him. Kali becomes the female embodiment of time (=Kala).

The puritan, patriarchal version of the end (doesn’t resonate with me) which came around the time of colonial rule in India, is that after slaying all the demons, Kali goes into a frenzy and dances across the Universe, threatening to destroy it. Shiva then lays himself under Kali which embarrasses her and she calms down.

Why is this story so relevant now? Saturn and the south node of the moon, Ketu are in Sagittarius, very close to the Full Moon in the axis of Mula (Sagittarius, deity: Kali) and Ardra (Gemini, deity: Rudra, a form of Shiva associated with destruction of the animalistic nature). Rahu, the north node of the moon, Sun, Mars and Mercury are all in Gemini bringing a lot of focus on the Mula-Ardra /Sagitarrius-Gemini axis. The two nodes of the moon are the physical points where the orbit of Earth around the Sun and the orbit of Moon around the Earth intersect. These points get illuminated during the eclipses (the next one being on July 2nd, 2019). The nodes are unintegrated parts of our psyche and subconscious that the soul is seeking to evolve. The Mula-Ardra axis is also where the galactic plane is located. The nodes in this axis now have opened up portals through which immense change and transformation are set in motion, as I write this.

Kali is associated with the underworld or the underbelly of the Universe; creating the opportunity to unearth the deep truth and lies that rule our lives. Sagittarius ruled by Jupiter is related to our higher principles and teachings – which is brought into focus by the microscopic lenses of Ketu and Saturn. Gemini is related to individual learning and interests through Mercury’s discernment, curiosity and questioning. There is immense potential now to bring focus and attention on your already existing systems – whether religious, spiritual, political, personal & others – question it, uproot it if it doesn’t serve you anymore and create the new.

It is easier to see this in world events now. The themes of masculine-feminine power-struggle in the collective consciousness and the individual consciousness is very evident. The rigid, often violent masculine forces in the world are being scrutinized and the feminist, me-too movement as well got a lot of backlash. I love watching ‘ The Patriot Act’ by Hasan Minhaj on Netflix because it brings to surface several social and political issues of our times – oil, immigration, large scale corruptions and scandals in Malaysia, India & Brazil, civil rights & capitalism, censorship in China, political dictators and tyrants across the globe & student loans amongst others. It is evident that the times we are living in calls for each one of us to be awake & woke; not live passively in oblivion.

The important allegory from the above story to remember is that as we struggle in this life – struggle because of our resistance; because of our false quest for truth; because of our quest for worldly fame, power & prestige (seen in the spiritual communities as well); we are challenged to rise above the noise and tap into the rhythms of the Universe – just like Parvati transformed into Durga, Chamunda and Kali to become the pulse of the Universe. If your tapas (penance), sadhana (practice) and devotion is for anything else, struggle and suffering is inevitable.

In the spiritual seeking communities, I often come across people who are enamored by the transformative Kali energy and mindlessly invoke her without really understanding the depths of her power. The word ‘transformation’ is used frivolously without focus and intention. I feel that we are very blessed to be presented with the current alignment in the cosmos right now. Saturn-Ketu in Sagittarius and Rahu-Mars-Sun-Mercury in Gemini gives the necessary restlessness, focus, drive, discipline & courage, inner power & apt discernment to embark on a journey to truly transform ourselves and by extension, the world.  Yes of course it may feel like you are dying at times; yes of course, you’ll be grappled with immense fear; yes of course, you’ll feel a level of angst like never before – the most transformational times of our lives do feel like that; yes of course, you’re are required to surrender and trust like never before – Are you ready for it?

I start & end my morning meditation with this simple mantra to align myself with the cosmic powers: 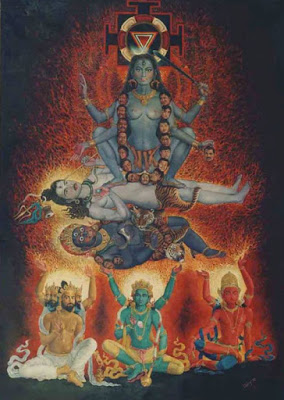