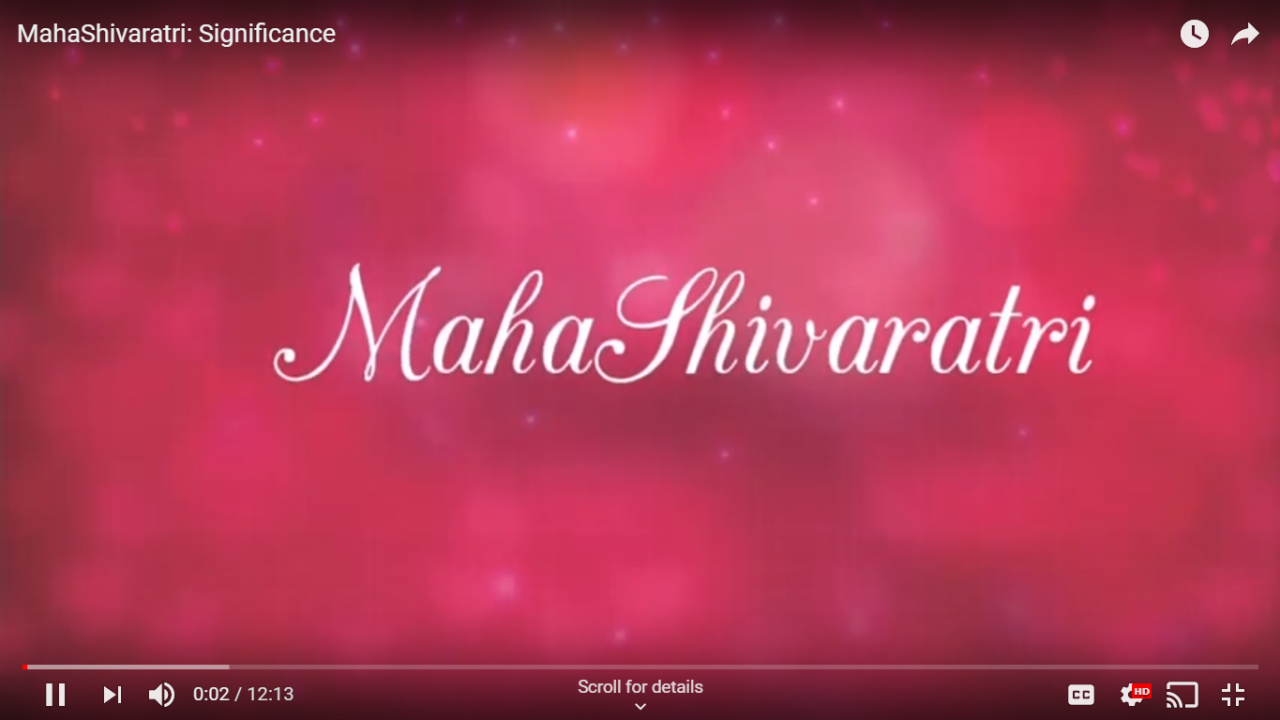 MahaShivaratri is a special night when the devotees of Lord Shiva immerse themselves in his devotion. Several devotees fast and/or stay up entire night chanting in praise of Shiva.

Every month or every lunation cycle, there is a Shivaratri. It is the 14th night of the waning moon; also known as the Krishna Chaturdashi in the Indian Panchang system. The Krishna Chaturdashi that happens before the new moon that marks the beginning of the Spring is a special one as the moon is considered to be the darkest amongst all 12 of the lunation cycles of the year. It occurs in the month of Phalgun in the sidereal zodiac of Aquarius (sometimes Capricorn) usually opposite the nakshatra (constellation) of Purva Phalguni.

There are two mythological stories that highlight the significance of MahaShivaratri.

The first story is about Chandra, the Moon God, who was married to 27 (27 equals the 27 constellations seen from Earth) of Brahaspati’s daughters. Amongst the 27, Chandra loved only one – Rohini. The other wives felt neglected and complained to Brahaspati. Chandra ignored Brahaspati’s urges to treat all his wives equally. Brahaspati in turn curses the moon to fade away. As the moon begins to fade, he meditates on lord Shiva. Embarrassed because of the curse, the moon takes refuge in the ocean, just beyond the horizon. The flora and fauna that are dependent on the moonlight begin to suffer which disturbs the balance of earthy life. When the moon is about to disappear, Lord Shiva appears and provides shelter to the moon on his head. That’s why we see Shiva with a crescent shaped moon on his head. This helps restore balance to the noctural life. Due to Brahaspati’s curse, the moon wanes for 15 days and with Shiva’s blessings it waxes for 15 days as it travels through the 27 constellations.

In this story, the moon is the metaphor for the mind. Our mind is constantly distracted and wavering. Many experience moods and emotions like the phases of the moon. When we anchor our mind and focus on Shiva, we experience true inner stability irrespective of what life presents to us on the outside.

The second story is of the churning of the milky ocean at the beginning of time. Both the gods and the demons desired the immortal nectar of life. They employed Mount Mandara as the churning rod and snake Vasuki as the churning rope.One of the first things that came out from the ocean in this process was a lethal poison called Halahala that threatened to destroy all of creation. Lord Shiva, being the saviour he is, consumes this poison. Parvati worried for Shiva’s life holds his throat to prevent him from swallowing the poison. As a result, the poison collects in Shiva’s throat and he becomes ‘Neelakantha’, one with the blue (neela) throat (kantha). Shiva becomes feverish with the poison in his throat. Hence, devotees pour water, milk, ghee and yogurt as offerings to the Shiva lingum to cool Shiva’s fever.

The churning of the milky ocean is a metaphor for our minds. When we churn our minds to find the immortal truth within us, often times we are faced with our own poison – our miseries, sufferings, attachments, mind-chatter, lies, bigotry and others. The invitation of MahaShivaratri is to give our unbearable poison to Shiva to hold so that we can enjoy the nectar of life.

As we approach MahaShivarati, I have been pondering over the significance of this night for me. In the the recent past, I have been going through a lot of my own mind-chatter. I finally reached a point where it became unbearable. That’s when I remembered the story of the milky ocean. In a blink of an eye, I handed over my poison to Shiva to hold. This created a profound shift in me. I realized, in true essence, our joys, sufferings and the sum total of our life experiences do not belong to us. They belong to Shiva. It is Shiva or call it the divine consciousness (or anything else you like) that experiences life through us. Isn’t that what Bhagvad Gita is all about too? Where Krishna tells Arjuna on the Kurushetra battlefield that our job as humans is to perform our actions and the fruits of that action belong to the divine.

Shav in sanskrit means a dead-body; Shiva is the one who has transcended death – that’s why he can hold our lethal poison in his throat. Shiva is also the one who has transcended time and space symbolized by the moon (moon is the mind, that creates the illusion of time) on his head. On MahaShivaratri, devotees are reminded to anchor themselves in Shiva to transcend the limitations of space, time and death.