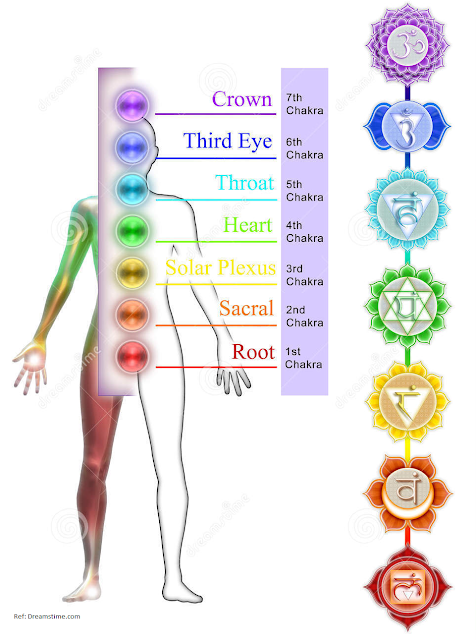 Figure 1: Seven Chakras: Locations and colors associated with them.

Chakras are often talked about in a metaphysical connotation or as extra-dimensional energy body. Most people have some kind of vague idea about chakras because of contemporary yoga movement and do not really understand what they are. But the ‘metaphysical’ chakras can very much be traced back to a physiologic phenomenon that can be explained in linear, logical and modern physics & biology terms.

To understand chakras one needs to first understand how neurons and nerve cells function. Neurons are cells in the body that constantly carry information from one part of the body to the other. The information in the neurons is carried in the form an electric signal called ‘synapse’. So in lay man’s terms neurons communicate with each other and the rest of the body using electricity; electricity is merely electrons flowing from one point to another through a conducting tube. In this case, neurons act as the conducting tube that facilitates the flow of electricity. 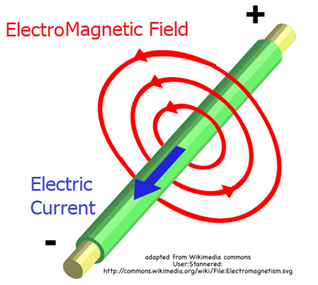 Nadis are neuronal network junctions in the body that receive and redirect electrons (information in synapses) from and to various parts of the body. There are 72,000 nadis in the body. The 72,000 nadis are classified as 3 main nerve types: Ida (Sympathetic Nervous System), Pingala (Parasympathetic Nervous System) and Sushumana (Central Nervous System). Anatomically, sympathetic and parasympathetic nerves branch out from the spinal cord. The networks from these 72,000 nadis (including ida, pingala and sushuman) in turn converge, cross and redistribute into 7 major nerve junctions that we call ‘chakras’. Therefore chakras are nerve plexuses where bundles of nerves come together to form a network and then redistribute (Figure 3). The nerve bundles crossing at the top of the spinal cord form the Throat chakra and the one at the bottom of the spinal cord form the Root chakra (Figures 1 and 3). 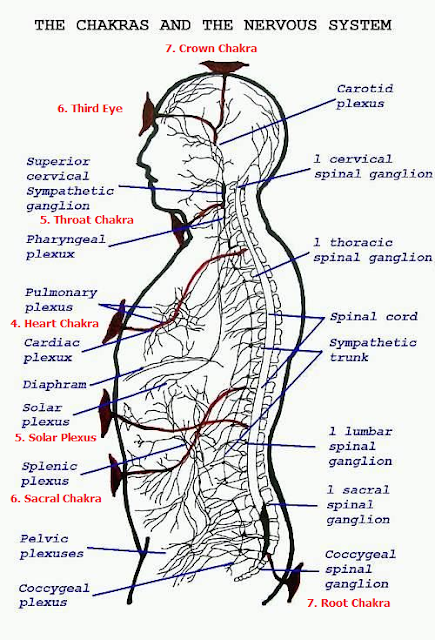 These nerve bundles that carry electric information and form plexus at the 7 major junctions give rise to an electromagnetic field at the 7 junctions of significant magnitude that can be experienced during yoga. The extra-dimensional aspect of the 7 chakras is partly due to the electromagnetic energy field created by the electron-carrying-dense-network of nerves. It is also important to remember that the chakras run along the spine – center of the body. Therefore one’s ‘heart center’ is the center of the chest and not to the left of chest where the pumping heart is located. The pumping heart and the ‘heart center’ are not the same thing.