I got inspired to do this just because Mercury (ideas and theories) is right now retrograde in Libra (relativity) and earlier in October the Nobel Prize in physics was given to Roger Penrose, Reinhard Genzel & Andrea Ghez for their work on black holes based on Einstein’s theory of General Relativity.

Special theory of relativity states that speed of light is the same for all observants, regardless of motion of the observant or the light source. Meaning, we see things in a location at the same time. Moon in the night sky will be seen at the same time by someone on the grounds of LAX airport versus someone looking out the window of the Southwest Airline taking off . This is possible only if time for the object in motion slows down which allows light to travel a greater distance (speed = distance / time). If the distance becomes larger then time also must become larger for speed to remain constant. This is called TIME DILATION. Easy to demonstrate: Sitting with your beloved watching the sunset – 10 mins seem like one (time dilated). Walking bare foot on a bed of burning charcoal – 1 min feels like 10 (time contracted).

For a moving object, time does not dilate enough to account for the speed of light to remain constant. To compensate the length or the size of the object contracts so that light has to travel lesser distance (LENGTH CONTRACTION). So, the moving object appears to grow smaller to the stationary object, relatively speaking. Like the airplane speeding off appears to grow smaller to the observer on land . Time dilation & length contraction work together to maintain the speed of light same for all moving or stationary observers. That means we all see a particular event at the same time irrespective of whether we are moving or not. 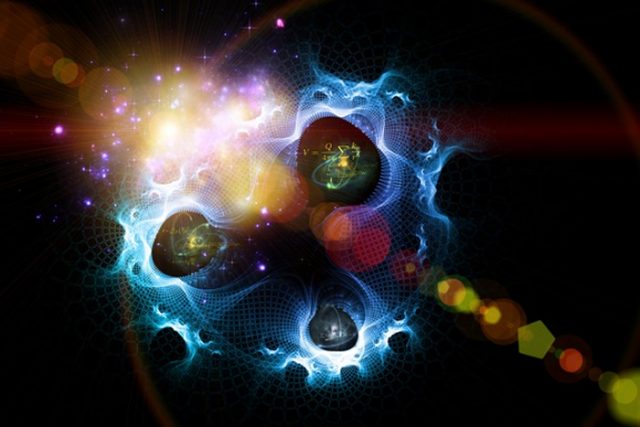 As planets are about change directions (retrograde or forward), they move closer & closer to Earth in space. For speed to light (=distance/time) to remain constant, they appear to slow down in their motion (time contraction) and cover smaller distance in our night sky. However, time does not contract enough to account of light’s speed. The size of the retrograde planet appears to grow in the sky. At its peak (retrograde stationary), the planet appears to be bigger and brighter in the sky. It also closest to Earth. The closer the planet gets to Earth in space, the bigger it appears in the sky. Observe Mars & Mercury in their retrograde motion next few weeks. It is easier to see it with Mars as it gradually becomes bigger & redder in the sky . Einstein’s theory of general relativity explains space-time bending (equates to mind bending). I’ll break this down some other time. The spacetime bending creates the metaphysical effects that we try to interpret with astrology.