The great conjunction between Saturn and Jupiter is happening right now in sidereal Capricorn and will be exact on December 21st, 2020, winter solstice in the northern hemisphere, summer in the southern. Jupiter & Saturn come together every 20 years, the last time being in sidereal Taurus in 2000. So why is this conjunction called the ‘great’ one that happens once in 800 years. To understand this, we need to understand a bit of astronomy. (For those not interested in astronomy, scroll to Interpretation below).

Let’s start first with the ecliptic. From an observer on Earth, the path that the Sun traces in the sky over the course of a year against the background of stars is called the ecliptic (black line in figure A, red in Figure B). The ecliptic plane and the celestial equator – which is earth’s equator projected back in the sky (green line in figure A) used to be the same but because of precession (continual tilt of the Earth’s axis), there is a difference of ~24o at the moment. This is also the difference between Vedic and Western astrology, wherein one accounts for this 24o difference in the ecliptic plane due to tilt in Earth’s axis and pins the zodiac to the background of the stars. 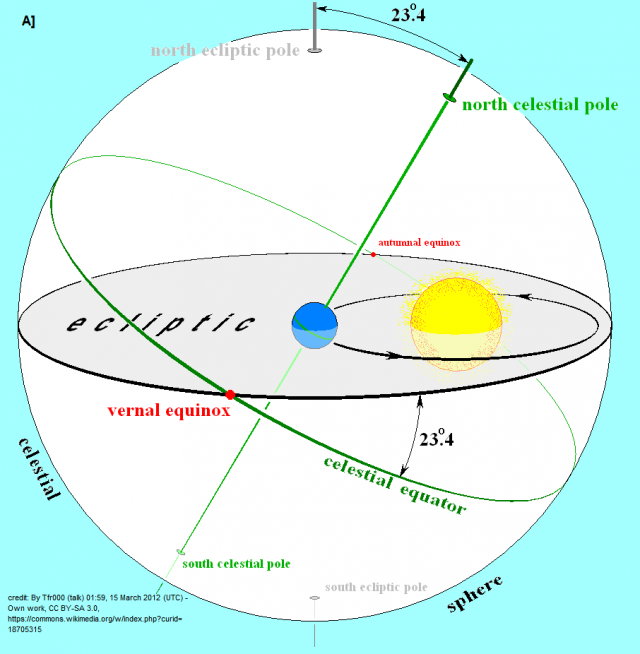 Ecliptic latitude (also referred to as declination) is the (angular) distance of an object north (+) or south (-) from the ecliptic (Figure B). The north ecliptic pole is +90o and the south is -90o.

Get the picture? Since, Jupiter travels faster than Saturn in Earth’s sky, every 20 years or so, Saturn and Jupiter join together in the sky as Jupiter crosses Saturn. However, what we are experiencing now is that Jupiter and Saturn are not only coming together in ecliptic longitude but also ecliptic latitude. In Figure C, what we see is the distance between Saturn-Jupiter (degrees in blue) becoming shorter, not just in how far they have traced along the ecliptic but also their north-south inclination from the ecliptic. Saturn-Jupiter appear as one big bright star in the sky with their rays converging from our vantage on earth. This is also called planetary war that ancient Indian astronomy texts, namely, Surya Siddhanta elaborated on.

This kind of conjunction happened 800 years ago, around March 4, 1226 in sidereal Capricorn – when Genghis Khan was alive. Jupiter and Saturn also appeared really close on July 16, 1623 – when Galileo was still alive. 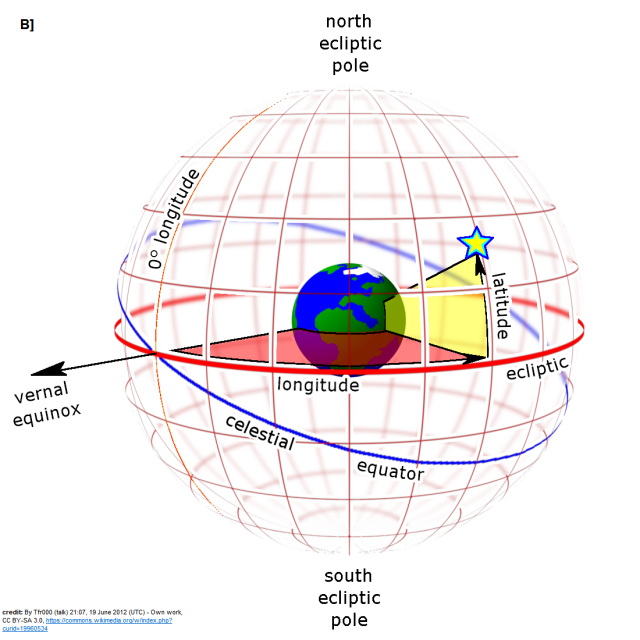 Interpretation: Is this great conjunction important then? Of course! Saturn and Jupiter are outer planets visible from Earth that are slowest moving. Hence, their effect on time or kala is really felt. Saturn really slows things down, making sure we have learnt from our mistakes – if not Saturn makes sure we learn them well by bringing difficulties. Saturn is Capricorn emphasizes the slow, cautious, serious nature of Saturn where we cannot have a passive approach to life. Jupiter in Capricorn cannot easily express its hopeful, expansive, abstract optimistic, self – and get bogged down by the details and the resources required to just maintain life. So, wherever Capricorn falls in your chart. It is time to get serious, cautious, and have a measured step-by-step approach. When this conjunction happened in 1226, the world was torn between absolute authoritarian powers like Genghis Khan and the implementation of Magna Carta to protect the rights of people against a tyrannical authoritarian. In 1623, we felt the stress between authoritarian church policies and physical sciences. In more recent times, we saw Reaganomics in the 1980’s where trickle down politics created a wide rift between the rich & the poor as we experience it today. In 2000, we saw the software bubble burst & technology take a new ever-growing shape that we are still experiencing.

I expect Saturn-Jupiter conjunction to have major impact on (1) the governance of various countries, (2) capitalism & economics all over the world, (3) the extreme divide between the have’s & have-not’s, (4) immigration refugee & asylum seekers, and (5) use of resources & Earth – how consciously we are consuming & plundering the Earth. I have already done a few readings where people have talked about the ambition & desire to pioneer a new way of governance where people get a say in every part of the way the Constitution is written. I have had clients express their ambitions to create a sustainable monetary system based on their genuine concerns about electronic money, fiat currency, bitcoins, instability of current economic systems, & lack of free-markets. See the wave? I expect the polarities to get extreme before things begin to break. We are already experiencing this rip in the fabric of society with polarized US elections, theories & treatments about Covid, social disrupt in the East & the West, rise & opposition of authoritarian world leaders, etc. While we are in the middle of this so called social, economical & political reset, expect to feel a level of hopelessness, confusion, & chaos. We have experienced these polarizing energies in the past & have come out reformed. Since, this conjunction is taking place in the nakshatra of UttaraAshada, the constellation where victory is guaranteed through relentless building & re-building, I would expect all of us to go through a few iterations of the society we want to create before coming out victorious with a system that works for everyone. If you are alert, awake, cautious, & manage your own inner & outer resources well, in a few years you’ll find yourself ahead of the curve. It is natural to feel an extreme sense of chaos & anxiety when the world itself is turning inside out. It’s only when we are on the other side of the roller-coaster ride is when we can connect the dots in retrospect to appreciate the reforms that have taken place. Till then, hold onto your seat-belts! 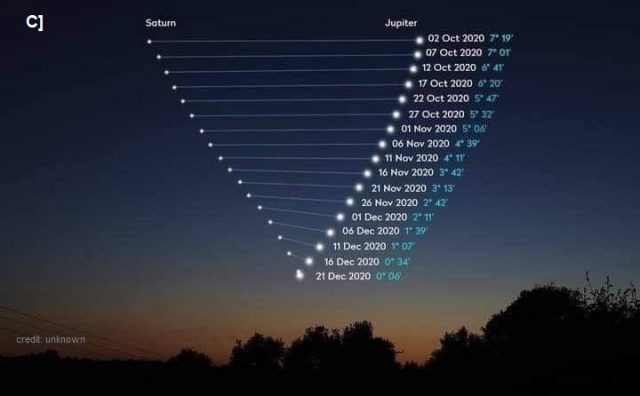